THE CHURCH OF ST. JOHN THE BAPTIST, KINGSCOTE
(Sourced from a booklet by Norman Parker)

Origins
The age of the parish church is uncertain and periods of restoration and reconstruction over the centuries have changed its structure and appearance very considerably but, from the evidence offered by such parts of the original church as still remain, it is likely that the people of this parish have been passing through the north doorway for something approaching 800 years.

Looking for such points of early architecture we find, on the north and south walls of the chancel, a pair of deep-splay, Early English lights which have been re-glazed in recent years which suggest an earliest date of 1200. The chancel arch has a very massive responds and appears to be 13th century. On the north wall of the nave is the entrance doorway which is of round-headed Norman style indicating pre-1200 construction. 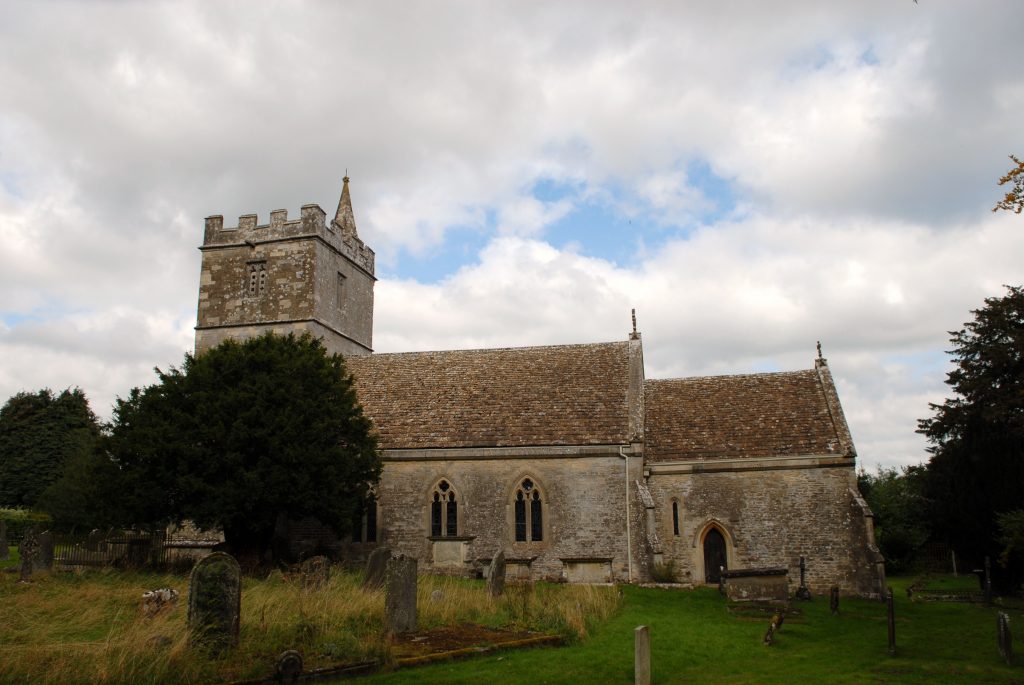 But there is one more clue which helps us to get nearest to the probable date when the church was built and, strangely enough, it is a consequence of the 19th century restoration of the church which obliterated so much of the earlier architecture. In 1849, when workmen were removing the floor of the church with a view to it being re-paved, they struck a large stone less than three inches below the surface which was the bottom of an overturned stone coffin. Beneath it lay a complete skeleton ‘scarcely at all decomposed though somewhat disarranged by the overthrowing of the coffin at some earlier time’. From the dimensions of the coffin and the bones it was concluded that they were of a full-grown young woman.

From the known historical facts it was deduced that they were the remains of Aldeva who married Nigel FitzArthur, the founder of the Kingcote family, in around 1153. 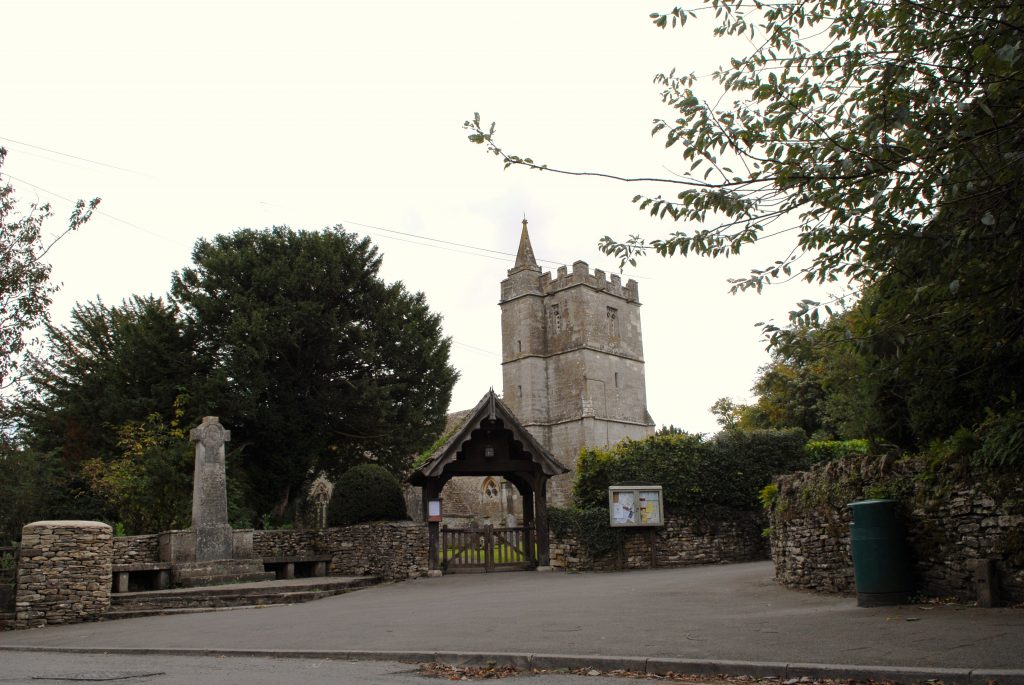 The Tower
It seems that the tower of Kingscote church was added in the 13th or even the 14th century. It is, however, the one significant part of the building which appears to have survived more or less untouched apart from superficial restoration work, much of which is of very recent origin. It is of no great height, well proportioned, battlemented and of quite substantial appearance although it lacks the external enrichments found in many other parishes outside of Gloucestershire.

The main function of the tower has always been and remains to accommodate the bells. Church bells were rung far more frequently in earlier days than they are now. Bells summoned the parishioners to worship and were rung on the occasion of church festivals and at baptisms, marriages and funerals. They were rung at harvest time and also to warn the village when fire or any other disaster threatened. 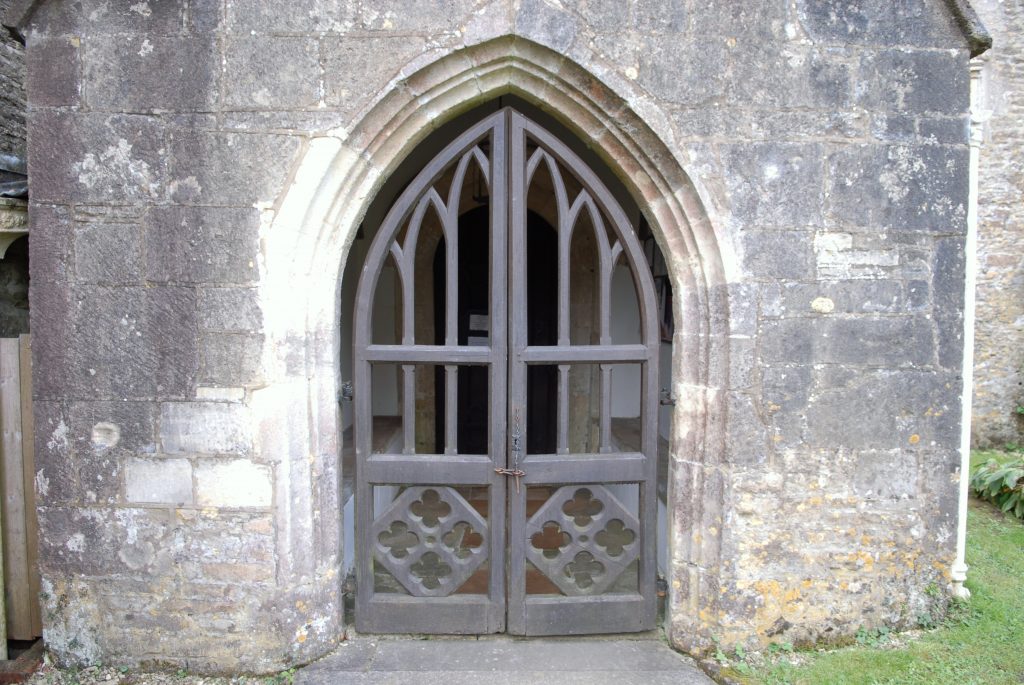 The Porch
Few, if any, early churches were built with porches and, in most cases, they were added in the 13th and 14th centuries. The majority of medieval churches had the entrance in the south wall so that Kingscote is unusual in having it on the north side. The round headed entrance doorway to the nave is without ornamental mouldings, appears to be from the late 12th century and, from its general appearance, would seem to have been protected by the porch for most of its time.

The Nave
The nave, which was probably the earliest part of the church, has been so altered by additions and restoration that, apart from the north doorway, it shows little evidence of its origins. Most of what is seen dates from the extensive re-building around 1850 or later. However, the tower arch at the west end probably dates from the 13th century when the tower was built. Also, although the present gallery at the west end of the nave was installed around 1800, it probably replaced or was added on to an earlier one built in the 17th century to provide additional seating or to house a band of musicians or singers. The seating, the pulpit and the font are all believed to date from the major restoration in the 19th century. The western doorway from the tower will have been used as part of the processional route to the altar.

The Chancel
The chancel arch which appears to be from around 1300 is broad, pointed and of bold character and suggests that the chancel was either a late addition to the nave or that it was enlarged at the time the arch was built. It is believed that the sanctuary was built onto the east end of the chancel around 1500 with a new east window. The existing screen to the chancel is made up from fragments of Jacobean work and the supports and other parts are clearly Victorian. The Jacobean carving may have come from the old west gallery.

The Transept
The north transept was used for pews by the Kingscote family for many years, probably after they were persuaded to give up their seats in the chancel, and is believed to have been built by them for that purpose in the first half of the 19th century. The transept has a fine panelled ceiling with tie beams springing from wall-posts which in turn lead down to eight corbels in the form of finely carved crowned heads. On the east wall is a beautifully carved oak panel dated 1639 which was almost certainly brought from the old manor house to adorn the family pew. The transept also contains busts of Thomas Henry Kingscote and Lord Raglan, the uncle of his first wife, who lost an arm at Waterloo and was the British Commander-in-Chief in the Crimea.

This website uses cookies to improve your experience while you navigate through the website. Out of these cookies, the cookies that are categorized as necessary are stored on your browser as they are essential for the working of basic functionalities of the website. We also use third-party cookies that help us analyze and understand how you use this website. These cookies will be stored in your browser only with your consent. You also have the option to opt-out of these cookies. But opting out of some of these cookies may have an effect on your browsing experience.
Necessary Always Enabled
Necessary cookies are absolutely essential for the website to function properly. This category only includes cookies that ensures basic functionalities and security features of the website. These cookies do not store any personal information.
Non-necessary
Any cookies that may not be particularly necessary for the website to function and is used specifically to collect user personal data via analytics, ads, other embedded contents are termed as non-necessary cookies. It is mandatory to procure user consent prior to running these cookies on your website.
SAVE & ACCEPT